The code below shows the formula property of the Projection space in the simplelife model from lifelib v0.14.0.

The formula has always been that convoluted since the first release of lifelib and I wanted to make it simpler and easier to understand. I had thought about how to enhance modelx so that the formula above could be stripped down to a simpler expression. After a long while I finally came up with the idea of relative reference and implemented in modelx v0.10.0, which was released a couple days ago. The concept of relative and absolute reference is somewhat similar to that of spreadsheets.

With the introduction of relative reference, the formula can be as simple as below.

Let’s say you want to build a simple cashflow projection model of life insurance policies, one that’s similar to but much simpler than simplelife. 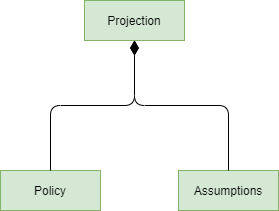 For example, Projection would contain PolsDeath, Number of Death, which need to refer to BaseMortRate in its formula. BaseMortRate is in Assumptions, and in turn it needs to refer to Product, Product ID of the selected policy, which is in Policy.

In order for BaseMortRate to be able to refer to Product in Policy, Product needs to be visible from Assumptions. One way to achieve this is to define a Reference that is bound to Product. Let’s name it prod here. 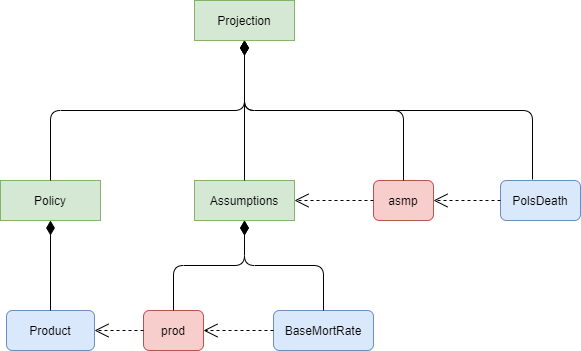 You would think that setting the parameter as below would work:

With the introduction of relative reference, lifelib models will be simpler. I haven’t updated the lifelib package yet, but I developed an experimental implementation of an updated simplelife as newlife. A refined version of the newlife will replace the current simplelife.

In the current version (0.0.14) of the simplelife model, Projection space has the following formula as I mentioned earlier. 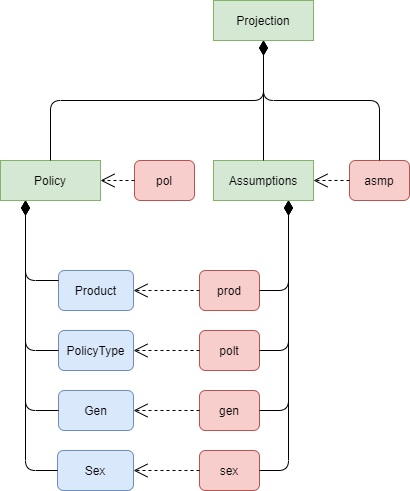 And Projection.formula is as simple as: