Building an object-oriented model with modelx

Multiple objects of similar types tend to have common definitions of logic and data. Modeling these objects manually one by one is not a good idea, because you would end up having multiple copies of the same definitions, which are hard to maintain and error prone.

modelx supports an inheritance mechanism, which enables you to define the parts common to the multiple objects only once as part of a base object, and model each object by inheriting from the base object and defining only the parts unique to the object. By making full use of inheritance, you can organize the multiple objects sharing similar features into inheritance trees, minimizing duplicated formulas and keeping your model organized and transparent while maintaining the model’s integrity.

You may have heard about object-oriented programming (OOP). OOP is a programming paradigm, and most modern programming languages, such as Python and C++, support OOP. Such languages include powerful mechanisms, such as inheritance, for elegantly modeling complex objects. Inheritance in the OOP languages greatly enhances code reusability and extensibility.

modelx is inspired by OOP, and implements an inheritance mechanism similar to that of OOP. However, while most popular object-oriented programming languages use class-based inheritance, modelx uses prototype-bases inheritance.

Python for example uses class-based inheritance. Python lets you define classes and objects are instances of the classes. Inheritance relationships in Python are defined in terms of classes.

In modelx, there is no class equivalent, and inheritance relationships are defined between Space objects. A space object inherits from another space object, in order to use the other object as a prototype.

How Inheritance works in modelx

An inheritance relationship is established when you define a space(let’s name it A) as a base space of another space(let’s name it B). In this case, A is called a base space of B, and B is called a sub space of A. When B inherits from A, copies of all the cells, references and spaces contained in A are automatically created in B. This automatic copying is called deriving. For example, let A have a child cells foo and a child reference bar. As the figure shows, another set of foo and bar are derived in B. The lines between A and B with a hollow triangle arrowhead on the side of A indicates that B inherits from A. 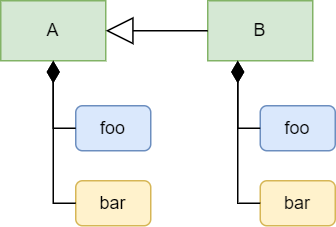 Initially, the formula of foo and the value of bar in B are copied from those in A, but you can update foo’s formula and bar’s value in B. This act of updating derived objects are called overriding. You can also add a new child object in B, for example a new cells named baz.

Let’s learn how to implement inheritance by modeling a simple financial product.

Note that the interest rate applicable after the first 5 years is not known at the inception of the loan, because the rate is not fixed in advance. So the interest rate table above is an assumption or a scenario if we are modeling a loan to be paid off at a future point in time.

To identify the commonality between the two types of mortgages, let’s review the contents of Fixed from the earlier example one by one, and think about whether and how they should be updated.

The tables below summarizes how the contents of each space should be defined.

You may have noticed that instead of creating BaseMortgage, it is possible to model Adjustable by inheriting from Fixed. Although it’s technically possible, it’s not a good design, because the adjustable mortgage is not a special form of the fixed mortgage. Good practice is to make sure that an inheritance relationship should always represent “is a” relationship.

We start from the Mortgage model from the earlier example, but you may also start from scratch if you prefer.

Let’s use the Fixed space as the base space. Rename it BaseMortgage

Now set 10 to Term, which is a constant shared between the sub spaces.

Now let’s create Fixed under the model by inheriting from BaseMortgage. You can do so by passing BaseMortgage to the bases parameter of the model’s new_space method.

In the same way, create Adjustable by inheriting from BaseMortgage.

Next, we set the interest rates by duration for Adjustable as a dict. Note that the index starts from 0, so the key for the Nth rate is (N-1).

You may also assign 0.03 to Rate in Fixed, although the value is inherited.

To refer to Rate in the same manner in both Fixed and Adjustable, we create a cells IntRate indexed with t. First we create IntRate in BaseMortgage and define its formula to raise a NotImplementedError to indicate that it needs to be defined in the sub spaces. There are a few ways to define the formula of IntRate. Here we define it by first defining a Python function and then assigning it to InitRate’s formula.

Then override IntRate in Fixed and Adjustable to refer to their own Rate.

Next, we are going to define Payment in BaseMortgage so that the definition of Payment in the base space can be inherited and used both in Fixed and Adjustable without change.

The formula before update should look like below in BaseMortgage because we developed it from Fixed form the earlier example.

The formula above exactly represents the math expression below, which is a known formula to calculate the amount of level annual payments to pay off in Term years a debt with interest accruing at Rate a year.

To make the formula applicable to Adjustable, we need to apply the following changes.

The corresponding math expression is as follows:

In reality, the interest rate is updated annually, so one year later at t=6, the IntRate(6) may be different from IntRate(5). In that case, Payment(7) is updated such that the updated amount would pays off Balance(6) with interest accruing at IntRate(6) for the rest of the loan term.

We need to update one more cells. Balance is defined in BaseMortgage as follows.

The formula should refer to IntRate(t-1) and Payment(t) instead of Rate and Payment respectively:

Now that we have completed making all the necessary changes, let’s check the results. Below the adjustable payments are output as a dict. As expected, the payments increase after the first 5 years because the interest rate at t=5 is higher than before. The payments then vary every year, reflecting the changes in the interest rate. 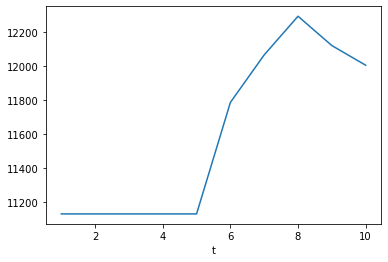 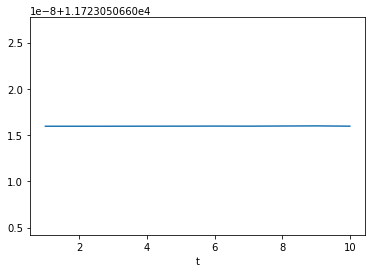 Below is the output of Adjustable.Balance. You can see that the balance is actually paid off at t=0. 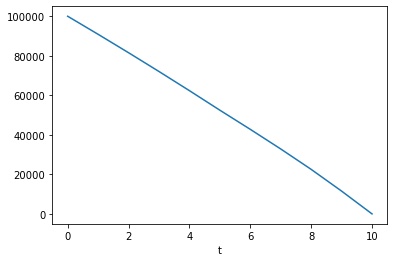